What's that in the undergrowth?

Today, while walking through central Kazan, a Russian friend of mine pointed, with a cheeky grin, at a patch of weeds at the side of the road. Curious, I bent down for a closer look, and was more than a little surprised to recognize a certain iconic leaf: it wasn’t just weeds, it was weed! 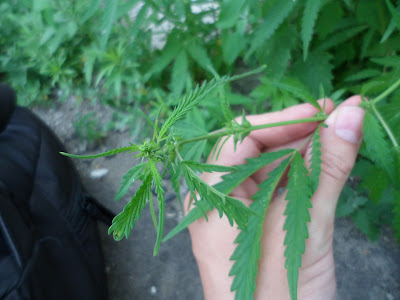 He explained to me that the stuff grows all over the city, but that no-one ever harvests or smokes it, and that to do so wouldn’t produce any sort of high. I really couldn’t believe that cannabis was growing, quite visibly, in the streets of a major city in Russia, a country with strict anti-drug laws. Nor could I understand why smoking it wouldn’t yield any effects. I tried to enquire further, but the language barrier prevented me from understanding any fuller explanation.

When I got home, however, a bit of online research eventually shed some light on the situation. Cannabis does indeed grow wild (or, perhaps more accurately, feral) in much of Russia and other parts of the former USSR. However, from what I’ve gathered, the plants that grow here are of the species Cannabis ruderalis, while the two species smoked around the world are Cannabis sativa and Cannabis indica. Cannabis ruderalis contains much less THC (the chemical that produces a high) than its two cousins, and as such has no potential for recreational use. Instead, Cannabis ruderalis was historically cultivated for the production of hemp, not just in Russia but also in North America. During the 1960s and 1970s, the Soviet Union was the world’s largest producer of hemp, and cannabis had been cultivated for this purpose in the region for thousands of years. It is thought that these plants growing freely in Russia today are remnants of the once-lucrative hemp industry. Similarly, feral Cannabis ruderalis plants do grow across the Midwestern USA. However, since cultivation of cannabis for any purpose has been banned in the US since the early twentieth century, the American government has gone to great lengths to eradicate any free-growing plants, hence them being less prominent than in Russia, where the authorities seem to have a more pragmatic attitude.

So it turns out that these plants are not the same cannabis that can be smoked, but that does not make it any less surreal to see them growing in the streets. It really serves to remind me that I really am not in northwestern Europe anymore. Furthermore, it serves to emphasize that Tatarstan’s links with Asia and the Middle East are not just cultural, but also geographical, ecological and climatic: cannabis growing in the streets is something one would expect in Afghanistan more than in Russia.