“MARI CHODRA NATIONAL PARK”, or “An exasperating experience with Russian public transport and some unfavourable encounters with local fauna”

Based on some stuff I’d read online, plus a recommendation from a British guy I met in a bookstore here in Kazan, I decided last weekend to go to Mari Chodra, a national park a couple of hours drive west of Kazan, in the neighbouring republic of Mari El. Last year, when I travelled around the Balkans and Central Europe, I had no trouble finding myself transport from one place to the next, despite no knowledge of local languages. Here, armed with a basic knowledge of Russian, I figured it would be a walk in the park. The Briton who I’d spoken to in the bookstore had told me that to get to the national park he had taken a bus towards Yoshkar-Ola (the capital of Mari El), and gotten off at a place called “Yalchik”. A bit of internet research revealed Yalchik to be the name of a lake within the national park, purportedly a popular destination for people from Kazan. Efforts to find online information about the best method of public transport from Kazan to Yalchik, however, were more or less entirely fruitless. It was very much apparent that Mari El and Tatarstan are not popular backpacker destinations: the forums and websites I had relied upon for information about transport during last year’s travels were of no use. Furthermore, Russian bus and train companies seem to only have limited online presence, and no options to change their websites’ language. All I could ascertain for certain was the existence of a train station not far from Lake Yalchik.

So, the evening before we intended to go, my friend and I trekked to the train station to ask about times and prices. After a lot of queuing and being redirected to different booths, we eventually learnt that there was only one daily train from Kazan to Yalchik, at 17.30. No good for a day trip. And of course, nobody working at the train station knew anything about buses, so the bus station was our next port of call. By the time we got there, however, all the information windows were shut. On the wall was a sort of makeshift timetable, but it had no mention of Yalchik. However, just as we were beginning to despair, a man went up to one of the information booths and started banging on the window. Eventually, someone came and opened it. An argument ensued: the general gist being that the woman in the booth had clocked off and wasn’t going to help with whatever the man wanted. During all this commotion an elderly woman, who we had asked if she knew anything about how to get to Yalchik, took it upon herself to help us. She physically dragged us to the booth and started shouting at us “Спрошите! Спрошите!” (“Ask! Ask!”), despite the fact that the employee was already engaged in an argument. Eventually, motivated by the fervent encouragement of this old babushka, we managed to butt in with our enquiry. We were told to go and ask a bus driver, before having the window slammed shut in our faces. We thanked the old woman and headed to where the buses were waiting, behind the station. There we found a bus driver who explained to us with confidence that every bus to Yoshkar-Ola goes via Yalchik. So we returned to the timetable, and decided to take the 9.35 bus. Easy. Or so we thought.

The next day we arrived promptly and asked for tickets to Yalchik. “No buses to Yalchik, you need to get the train.” “But we asked a driver yesterday, and he said the buses to Yoshkar-Ola stop at Yalchik.” “No buses to Yalchik, you need to get the train.” Let’s just try the other booth. A similar response, though this time a bit more sympathetic: we got given directions to the train station. We walked out of the bus station, downtrodden. What were our options? We knew it wasn’t possible to go by train, and we were loath to admit defeat, so after some debate, we decided to just go to Yoshkar-Ola. After buying tickets (about 250 rubles each) we asked when return buses were. The response was predictable: “Я не знаю” (“I don’t know”). Of course, it’s completely unreasonable to expect that an employee of Kazan Bus Station might know anything about buses to Kazan. Luckily for us, the 9.35 bus that we were originally going to take was almost an hour late, so we could still catch it despite our considerable delays. As we got on, we asked the driver if it would be possible to get off at Yalchik. He had certainly heard of Yalchik, but seemed more interested in what on earth us foreigners could be doing in Kazan, and whether we liked vodka, than telling us whether he would drop us off there. After several attempts at bringing the conversation back to our destination, we eventually retired to the back of the minibus fairly sure we were going to be dropped off at the elusive Yalchik after all.

The bus was packed full of locals and mysterious cardboard boxes, and it was unbearably stuffy as we rolled through the city’s heavy traffic. Once we got out of town, though, we sped up, fresh air started blowing in the open windows and we entered Russia’s enticing wilderness. We glided through vast meadows that seemed to stretch into infinity, through aged-old pine forests, past wrinkled old women selling berries by the roadside, past decrepit wooden barns and past pristine luxury dachas. For the first time since the train from Moscow, I felt something of the land’s enormity, saw the natural beauty to be found just a short drive out of Kazan, and was reminded that Russia is above all a land of boundless open spaces. I realized with regret just how small a section of this country I was going to see during these four weeks, and felt the call of the road: I wanted to travel out into the landscapes around me, to see it all, to live it. Russia, the behemoth at the top of the world map, dwarfing the nation states around it, was suddenly a real place, and I was in it. Eventually, the bus slowed as we approached a bus shelter with a large sign reading “ЯЛЬЧИК” (“YALCHIK”). Relieved that we had reached our destination, we started to stand up, when the vehicle sped up again. 30 seconds or so down the road the driver caught sight of us in the rear-view mirror, apologized, and turned around to take us back to our stop.


After asking a woman selling strawberries about buses to Kazan, and being assured that there was one every hour until some indeterminate point in the evening, we headed towards Lake Yalchik. On the way we passed what we thought at first to be a quaint little Mari village, but soon realized to just be a collection of dachas, probably owned by wealthy city people. As we walked through the woodland towards the lake, it really felt as though we were out in nature, far from civilization. However, when we found the lake the illusion was shattered by numerous groups of Russians scattered around the shore, sunbathing, barbecuing, playing badminton, paddling in the water and – in some cases – playing inappropriately loud music. Nonetheless, it was an undeniably beautiful area, and we found a quiet spot, settled down and enjoyed the cold water of the lake. Every Russian I’ve spoken to about Lake Yalchik has told me with pride about how clean the water there is, and it certainly seemed clean to me. There were plenty of small fish swimming in the shallows. There was a brief panic when a huge (well, OK, average-sized) black snake appeared inches away from me in the water; but after a lot of splashing and a few expletives on my part, it swam off into the reeds never to be seen again. 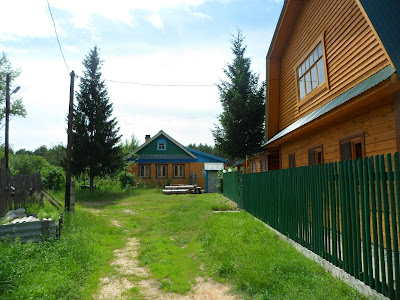 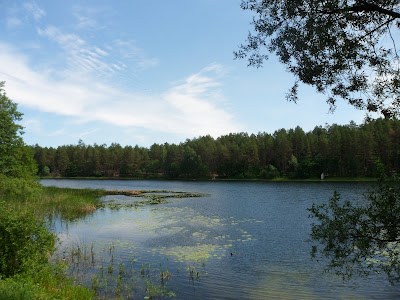 But the snake wasn’t the only wildlife we had to contend with: any parts of our bodies that weren’t covered by clothing or submerged underwater were constantly being plagued by mosquitoes and horseflies. Foolishly, none of us had thought to bring insect repellent. Adding insult to injury, the Russians around the lake seemed to be strutting about, scantily clad, without being in the least bit pestered by bugs. We eventually decided to head away from the lake, deeper into the forest, reasoning that mosquitoes live primarily by bodies of water. After a short walk we found ourselves surrounded by fantastic woodland, with no footpaths to be seen or cheesy Russian music to be heard. We had successfully recreated the illusion of being incredibly distant from humanity: we were in real, natural forest, without a sign of modernity. After relishing the ambiance for a while, however, we found ourselves being attacked by more mosquitoes than ever. Eventually it got so bad that we found ourselves physically fleeing; we were running full-pelt through the trees to escape the bloodsucking besetment. Eventually, exhausted, we happened upon a small outdoor bar, where we sought refuge, won over by the insect-repelling incense they had burning. But the measly incense stick was no match for our predators’ hunger, and scarcely had we put our beverages to our lips when we could stand it no longer, and resolved to go back to the bus stop. 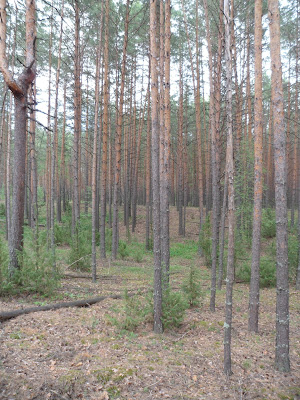 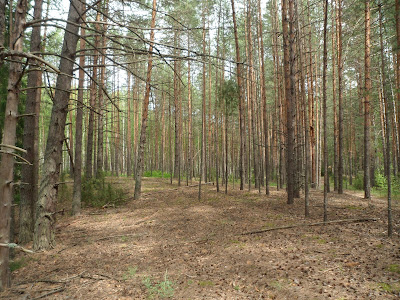 We weren’t waiting long when a bus to Kazan arrived. This bus could scarcely have been more different than the last: a huge, comfortable, air-conditioned coach that was less than half full. We paid the driver a mere 100 roubles each for the return journey, and it was unclear whether we were really buying tickets or whether that money would be going straight into his own pocket. The next day, when our fellow students saw us covered in bites and scratching all over, they were hardly envious of our excursion, but I have to say that being lunch for hundreds of mosquitoes was a price worth paying for an opportunity to spend time in such wonderfully unspoilt nature. 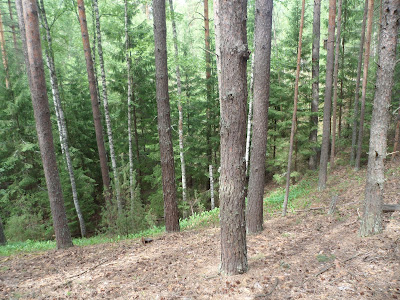