On June 23rd the official celebrations for Sabantuy took place. Sabantuy is an ancient festival indigenous to the Volga region, which was observed by the people here (Tatars, Chuvash and Bashkirs) before their adoption of Islam and Christianity. The name of the festival (“Saban tuyı” in Tatar) means “plough’s feast”, and the festival originally marked the start of the sowing season. Today it is a general celebration of Tatar culture (and, to a lesser extent, of Chuvash and Bashkir culture as well). There are events across the region, but the largest is Kazan’s, which takes place a short drive outside of the city. Despite the Institute’s best attempts to get us to go on a different excursion that they had organized, I went with some local friends to Kazan’s Sabantuy celebrations. 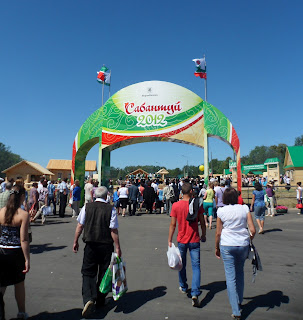 The central area of the festival was full of small stages, with various folk musicians and dancers all dressed in resplendent national costume. It seemed as though each stage had been set up independently, and that they were all in competition with each other, trying to drown each other out. Walking around, one could always hear at least two or three different sources of music, blending together into a medley of accordions and voices. 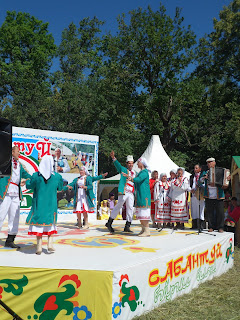 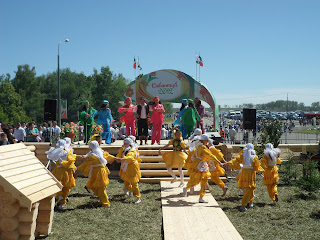 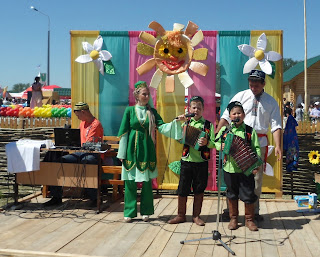 Scattered around the central area were also pristine wooden buildings: replicas of traditional Tatar abodes and banyas. There were whole families in traditional dress, apparently doing nothing but sitting in these fake houses all day. There was even a small fort. 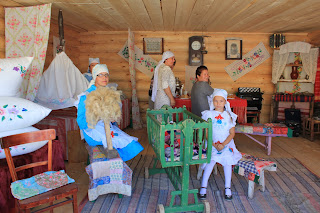 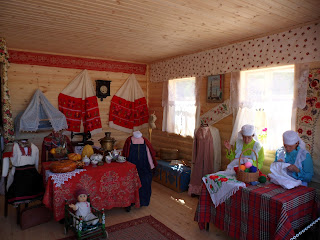 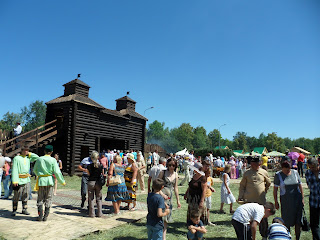 The Russians seem to have a penchant for posing for photos next to things. There were several objects about the place that seemed to serve no other purpose than being posed with. The oddest example was a whole lamb on a spit, with a huge rusty knife sticking into it. 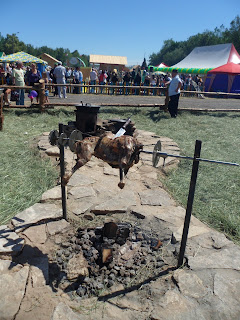 Further into the site was a pleasant wooded area, where there were an abundance of food stalls, most of which had their own barbecues, cooking various types of shashlyk (Russian shish kebab). There was also a chocolatier stall, where I bought a huge block of milk chocolate that looked like a massive bar of soap. Worryingly, it tasted a bit like soap as well… 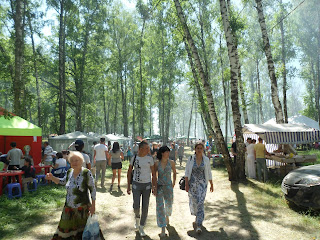 In the wooded area were also a host of traditional Tatar games, with which anyone was free to join in, if they could put up with the lengthy queues. Some of the games were familiar, albeit with a bit of a twist: there was a sack race, but the competitors were all running in their sacks rather than jumping; there was an egg-and-spoon race, where participants had to hold the spoon in their mouth rather than hand. Other games were completely novel: there was one where contestants were blindfolded and given a bat, and had to smash a clay pot placed on the floor in front of them; another game involved trying to walk barefoot up a long, narrow, smooth tree trunk stuck into the ground at an angle; best of all, however, was the pillow fighting that took place straddled on a log, first to fall off was the loser. Bafflingly, the prizes for these games were such desirable items as shampoo and washing-up liquid. I assume it was some sort of sponsorship thing, but none of the locals seemed in the least bit perturbed by it. I assume people were taking part for fun rather than the prizes anyway. 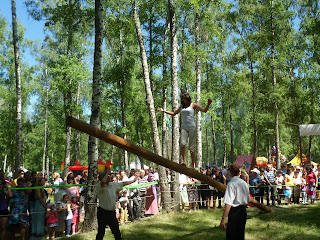 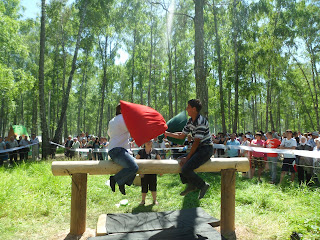 The focal point of the event was the enormous main stage. Various performers of folk and pop music, both Tatar and Russian, were on the stage while various games went on around it. To the left of the stage was a dizzyingly tall pole: the competition was to see how high one could climb before giving up and returning to the ground (with the help of a harness, thankfully). I assume participation in this event wasn’t open to everyone, as everybody who tried got impressively high. Most interesting to watch was kurash (also spelt köräş), traditional Tatar wrestling that was happening on the two squares in front of the stage. The games were short and usually only lasted one round: the two wrestlers locked into a sort of embrace, holding onto each other with towels, and then attempted to throw their opponent to the ground. Once one person had been thrown off his feet, the game was over and the next contestants entered the ring. The people taking part in this competition were definitely not motivated by a desite to keep in touch with their cultural heritage: the winner of the tournament received a car. 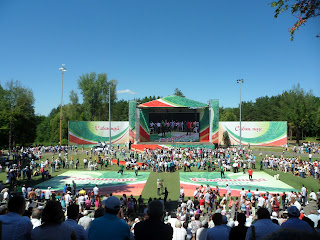 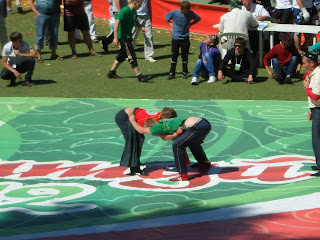 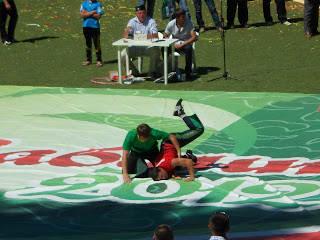 As a “cultural tourist”, this festival was a great opportunity to witness the relevance of Tatar identity and culture to modern Tatars. It seemed that most of the people in attendance were Tatars rather than Russians (although it is hard to tell), and I definitely didn’t notice any other foreigners. It seemed as though a lot of money and organization was behind the event, thus it wasn’t a “folk” festival in the true sense of the word, in that it was organized by the authorities rather than by the people themselves. It also seemed that a lot of the focus was on teaching people about the historic culture of their ancestors, rather than celebrating a contemporary culture. Nonetheless, it was a huge turnout and clearly a very important event, and shows that the Tatars are still in touch with their roots.
Posted by home to roam at 12:22